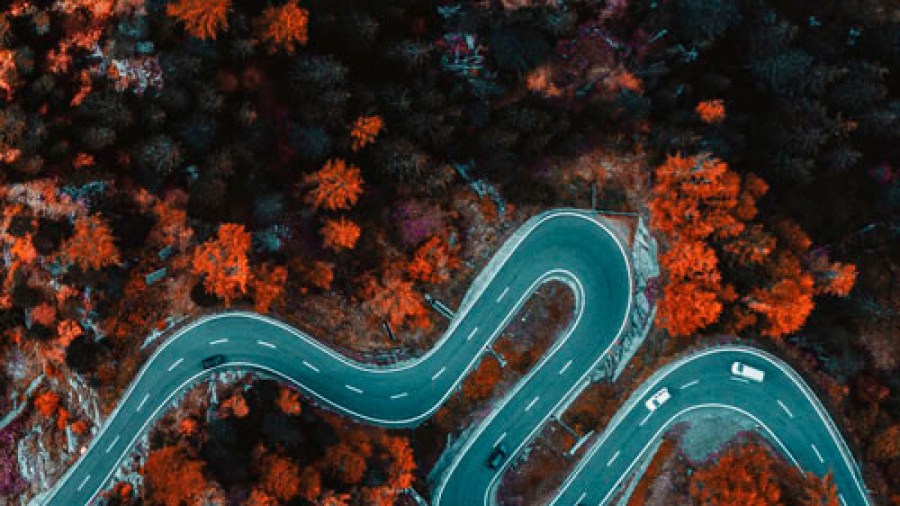 Well, I’m back again! Thanks to all who attended The Unexpected Guest. I had a great time playing Henry Angell and working with the rest of the cast. Hopefully the Harlequin will take me back really really soon.

Until then, I will continue to audition and perform in other plays, short films, and commercials. This month I played a background role in two commercials. I sniffed flowers and walked away in one, and in another I talked with other guys at a bar and then we all played a “game” of baseball. Seeing how I did get paid to play baseball, I technically am a professional baseball player (NO BIG DEAL).

I’m also playing multiple roles in Aladdin, performed at Sylver Spoon, a dinner theatre in New Braunfels, Tx. But that’s still to come, it won’t take the stage until April… you’ll learn more about that in the next monthly blog 😉 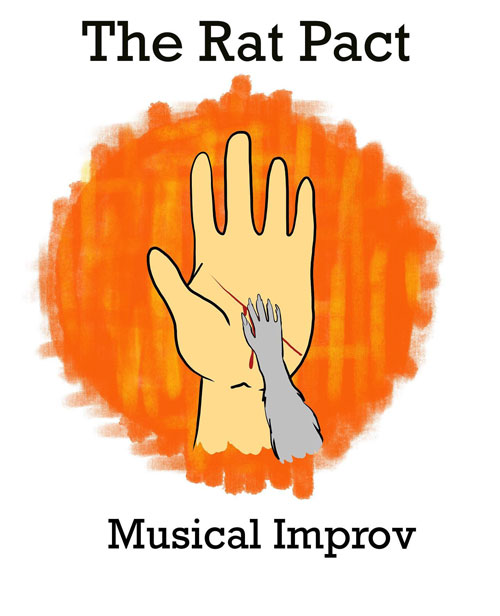 Outside of my acting endeavors, I have been providing piano accompaniment in a Comedy Improv group known ONLY as The Rat Pact. We will be making our debut performance Saturday, March 7th. After months of rehearsing and coming up with a style of improv unlike we all enjoy, it is time to share it with the world. We base an entirely original story off of a suggestion from the audience. The hero/heroine will go on a quest to defeat a villain and save the day!… typically. Sometimes it just amounts to the “hero” finally feeling appreciated by discovering years worth of mail in their boot.

The logo for our musical improv troupe was designed by our very own, Michelle Benton, a member of the San Antonio ComedySportz. The name is a pun on the original Rat Pack (Frank Sinatra, Dean Martin, Sammy Davis Jr.). It also came up in one of our skits of having a blood oath with a rat. Fascinating stuff!

Come check it out!! 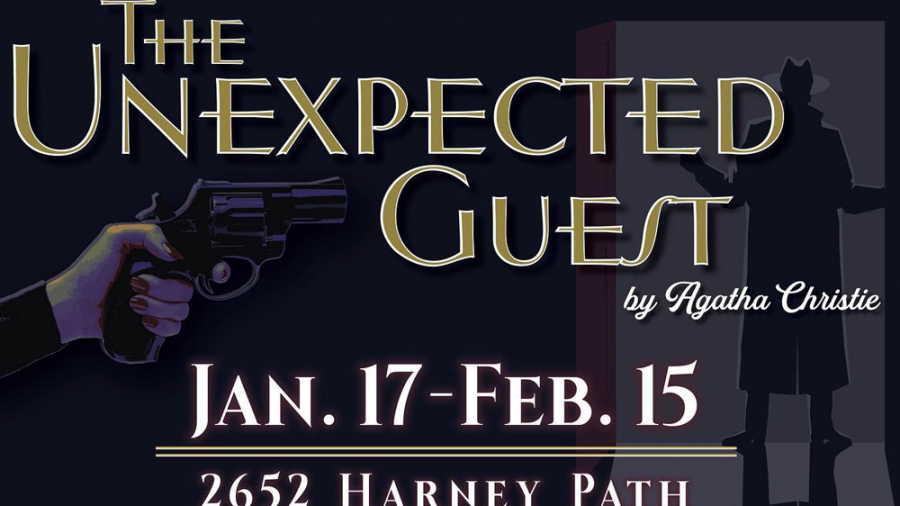 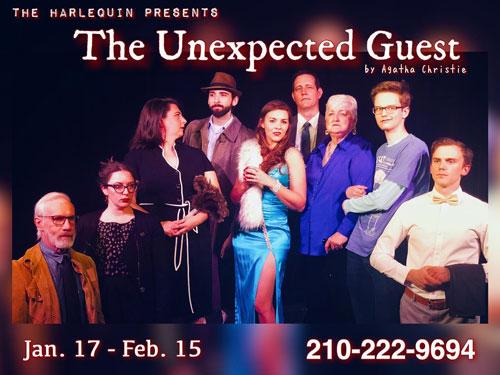 Whoo! Another play! All month I have been working on Agatha Christie’s The Unexpected Guest. I am playing Henry Angell, the shifty-eyed, male nurse attendant to the deceased. I’ve had a lot of fun with the character and I think that shines through my performance. Many people have come up to me after the show to say that I seem nothing like him in person, which I take as a compliment. 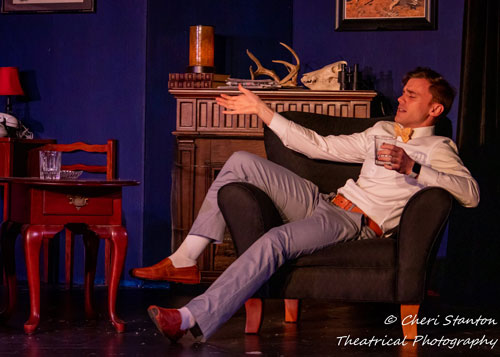 I stumbled upon the play from an acting group on Facebook, auditioned a few days later, and then got the part. I was a little nervous at first because I had literally read the script cold with no real knowledge of the characters, so the character type I went with sort of gradually changed as I learned more about who this character is.

The story is about “a lost stranger seeking refuge in a nearby house only to find a person shot dead with his wife standing over the body. The woman’s daed confession is anything but convincing, and the unexpected guest decides to help. Remarkably, the police clues point to a man who dead two years ago. As past wrongs emerge, a tangled web of lies reveals family secrets and chilling motives. The real murderer turns out be the greatest mystery of all.” 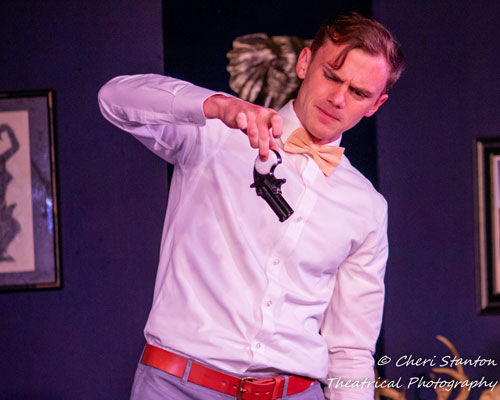 The play is being performed at the Harlequin. Opening night was the 17th of January but the show goes until 15th of February (starts at 8pm, doors open 7:30pm) so there is still plenty of time to check it out! Get your tickets now! Call in advance to guarantee your seats. Their number is (210) 222-9694 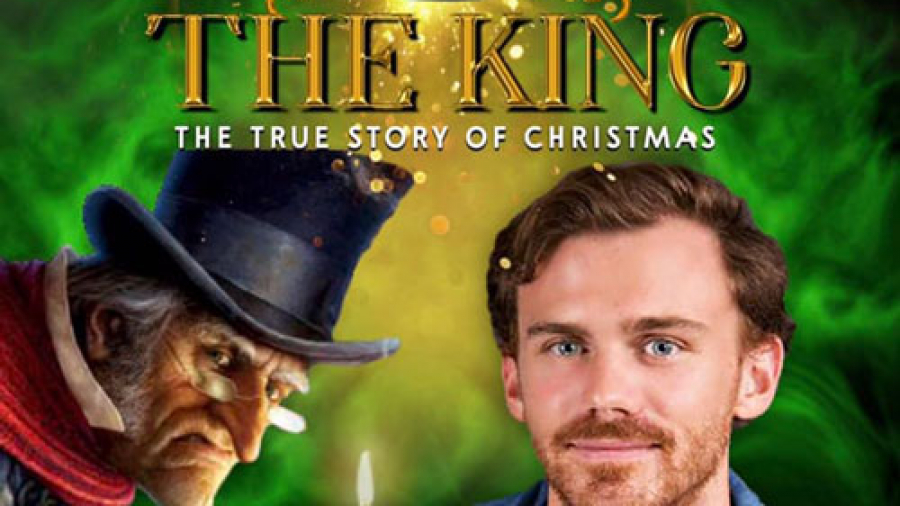 San Antonio promoting the Christmas musical, The King. I never know just what I am walking into when I go to the promotional events. On I Am Refocused Radio, I was asked personal questions about how I found out about the play and what I have gained from the experience. 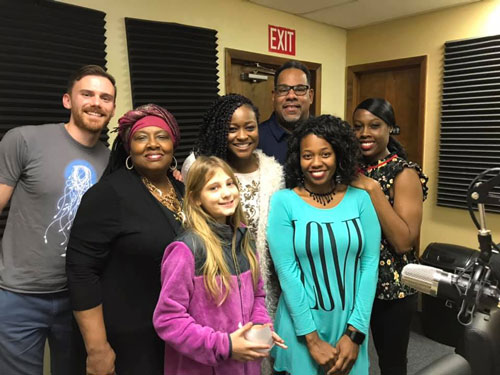 Next promotion was with KROV SA, which asked more surface level questions about playing the role of Scrooge. It was unique because it was live on the radio and more of the cast was there.

Probably the most exciting promotion was getting to be live on KENS 5 and answering questions on TV. I had no clue what I was going to be asked, so I didn’t really know what to prepare ahead of time (as you can probably tell). 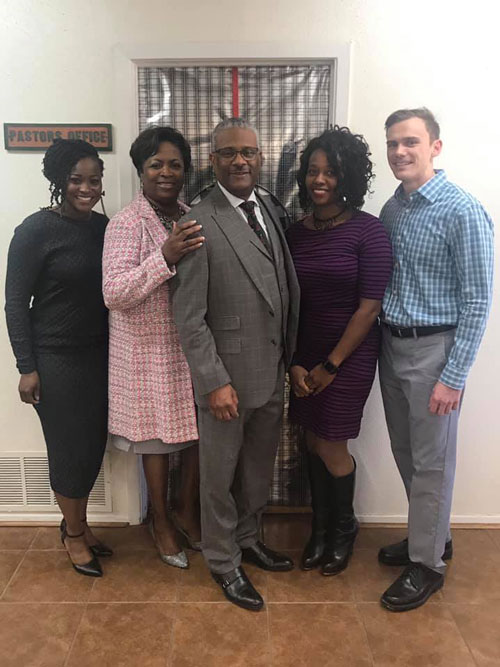 It’s crazy to think of how I even got involved with the musical. I first saw the flyer for auditioning for the play, I had no clue what it was about. I knew it was titled “The King” and from that I figured it was something historical. When I showed up to the address advertised I saw it was at a church and my heart dropped. Oh. I thought. That kind of king. As a non-religious person, I was not particularly excited about the idea. I felt my chances of even getting a part dropped significantly, so I changed my perspective. I was no longer going to be auditioning to be in the play, I was going just for the experience of auditioning. As someone who had just started standup comedy, I figured even if it goes horribly, at least I will have some grade A material for the next open mic!

Things proved even more surprising when I opened the door. Iwas the only not black person there. The whole production staff, the other people auditioning, everyone. I laughed to myself. So now I really thought I had no chance whatsoever of getting a part, but who knows, there is typically one or two tokens in every production, so whatever. Besides, I’m just doing it for the experience of auditioning.

My audition consisted of reading an excerpt of the script, singing and a dance routine I was taught in 30 minutes. The only singing I do is when I’m two old-fashions deep and the karaoke man is calling me up, it would take a couple more for me to even start dancing. I felt so laugh-out-loud out of place. My brain could not comprehend what was going on, I was practically forced to have a good time.

Although I tried out for Grinch, the director and her assistants asked for me to read the part for Scrooge. Yes, the angry bitter old white man. Fast forward to two weeks before today, the director said she knew what role she wanted everyone to play as soon as she saw them. I thought, oh wow, I guess I just look like a total Scrooge! haha, but in all honesty, I was not offended and it has been a joy working with Danielle Gulley and the rest of the crew, and have felt nothing but respect and love from them.

The cast has been practicing for this play since October and it has been awesome seeing everyone get their parts down beautifully over the past two-and-a-half months. I am actually glad I got the part of Scrooge because the actor playing Grinch is the well-renowned actor, Deance Wyatt. Soooo yeah, he will probably do a much more entertaining Grinch than I would do. Additionally, there will be Grammy-award Winner Fred Hammond playing Santa Claus!

Now that it is the week of the play we are working hard at our daily rehearsals. It takes the stage on the 14th of December at the Judson Performing Arts Center. You can purchase tickets here on Eventbrite. Check it out! I’ll be playing the role of Scrooge. It will surely help put you in the Christmas spirit! 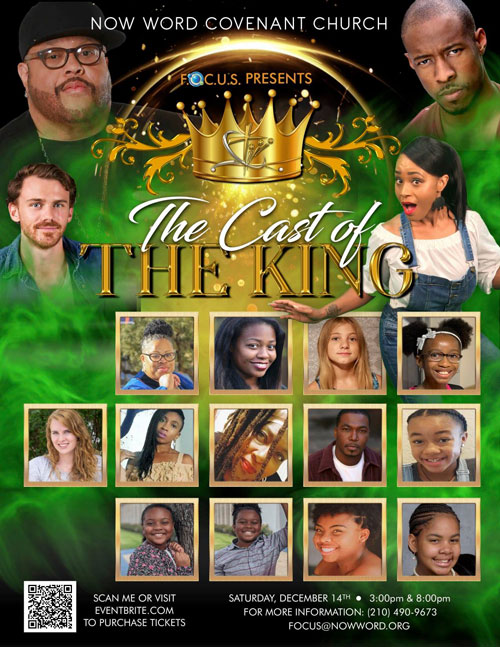 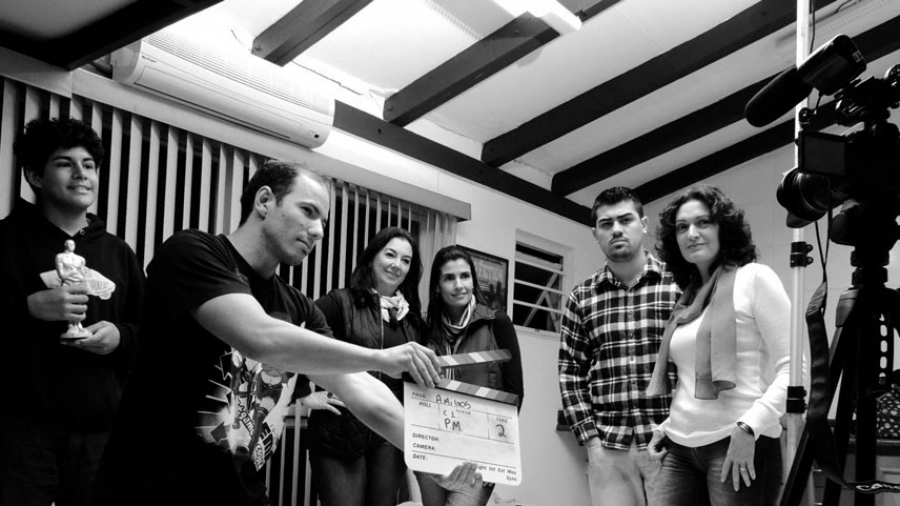 I was not able to get much done this past week in terms of adding to my portfolio, that’s because I was selected for a commercial gig. If you ever get the opportunity to be part of commercial – take it! They reimburse your travel, lodge, and you get to enjoy some pretty good food too!

The gig took about four days: one to travel, two of filming, and one to travel home. Most of the time I was hanging out in my hotel room reading, enjoying a little break from work. The commercial didn’t have a script and audio was not being recorded, so just to make each take feel fresh, the other actors and I had some pretty bizarre conversations. One of the guys would greet me in each scene with a completely different name, and it was hard not to burst out laughing at some of them. I had always wondered what people were talking about in those commercials where a narrator spoke over them. Turns out it’s anything form the mundane to the crude and raunchy haha. 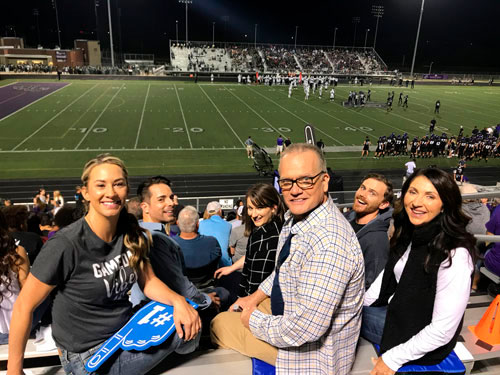 Here is a photo of us enjoying a football game. We had to film in fall apparel in Texas summer so, yeah. We were pretty hot haha. I had a paper towel in my hand the whole time to dab the sweat off my face and neck. Although that part was uncomfortable, it was fun and highly worth it if you have the time and are interested in being an actor. If you would like to find acting gigs like this one, I suggest checking out backstage.com and actorsaccess.com. Both of these are the common sites small time entertainment biz people find work. You’ll need to get a professional head shot(s) taken. A photoshoot often costs around $75 to even $350. I’ve yet to hear of a low budget actor paying a grand or some outrageous number like that for a photoshoot, but I’m sure it happens.

If you would like to check out my backstage profile, you can find it here.